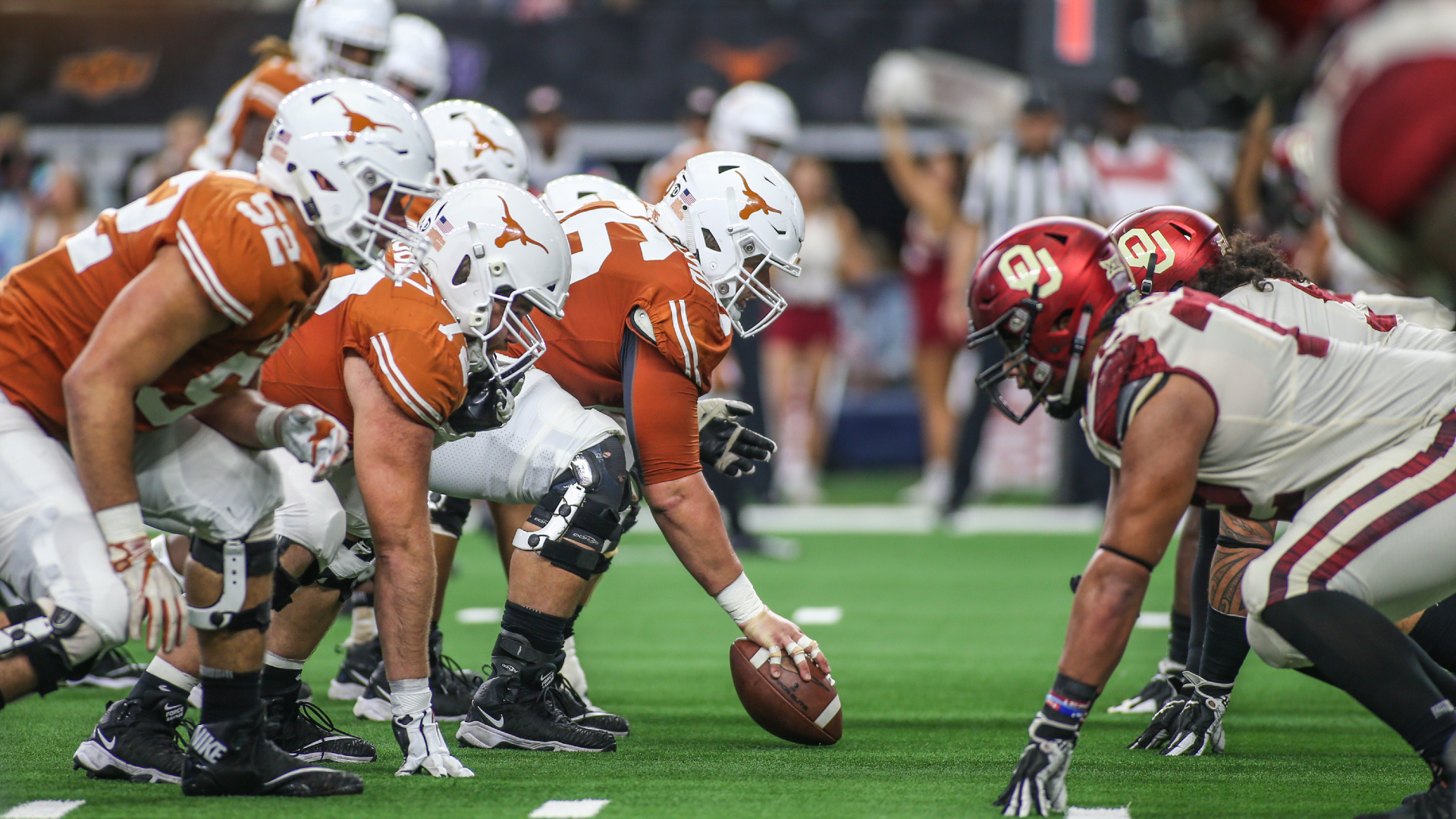 Texas and Oklahoma are at the center of what could be another major shift in college football’s realignment — arguably the biggest in the sport’s history.

According to a report from Wednesday by the Houston Chronicle, the Big 12 schools have reached out to the Southeastern Conference to join another round of reshuffling. The Chronicle, citing “a senior university official with knowledge of the situation,” reported that their addition could be addressed by the conference “within weeks.” The SEC would, in effect, become college football’s first super conference.

A Texas spokesperson, who spoke to the Chronicle, claimed to be unaware of talks with the SEC before declining to comment further. Oklahoma also released a statement in response to the news: “The college athletic landscape is constantly shifting. We won’t respond to every anonymous rumor.”

LAKE: Creating a ‘Super League’ for College Football: These 15 Schools Would Tie the knot in 2021

SEC Commissioner Greg Sankey declined to comment on the Chronicle before later telling reporters at SEC Media Days that the conference is looking no further than this year.

“We are only concerned about the 2021 season,” he said. “Someone dropped a report of unnamed individuals.”

AL.com the Chronicle’s report confirmed, saying that “multiple college football insiders” confirmed that Red River’s rivals had taken “multiple steps” to facilitate a move. It is uncertain whether the schools would act independently or would act jointly to try to exit the Big 12.

The Longhorns and Sooners have been affiliated institutions since the Big 12’s inception in 1996, when former Southwest Conference schools of Texas, Texas A&M, Baylor, and Texas Tech were added to the Big 8. The conference suffered significant losses in the final round of the college football reshuffle at the start of the decade, with founding members Colorado and Nebraska leaving for the Pac-12 and Big Ten in 2011, respectively. Missouri and Texas A&M followed suit after the 2011 season to join the SEC.

Texas A&M athletic director Ross Bjork said in response to the Chronicle’s report that SEC ADs have not discussed the addition of Texas or Oklahoma. He also scoffed at the idea of ​​Texas joining the SEC. Per Ross Dellenger of Sports Illustrated:

Ross Bjork says he was not aware of Texas/OU’s interest in joining the SEC. SEC ADs have not discussed the matter, he says.

It’s obvious where the Aggies are.

“There’s a reason Texas A&M left the Big 12 — to stand alone and have our own identity. That’s our feeling,” he says.

Bjork’s resistance to the move isn’t the only roadblock Texas and Oklahoma face as they jump off the Big 12. Here’s a rundown of the multiple hurdles that can keep schools from turning the SEC into a super conference:

According to a report by Front Office Sports, the SEC made $728.9 million in fiscal 2020 — about $300 million more than the Big 12’s reported earnings ($409.2 million). That difference, coupled with the SEC’s new deal with ESPN — which is estimated to pay more than $300 million a year to the conference and is expected to take effect in 2024 — would be attractive to outside teams looking to take advantage of the popularity of the SEC.

In addition, both ESPN and Fox — which have the Big 12 broadcasting and streaming rights — reportedly refused to enter into early TV negotiations with the conference before the deal expires in 2025.

That said, the Big 12’s existing rights with those networks could cloud potential negotiations between Texas, Oklahoma and the SEC. Texas has its own deal with ESPN in the form of the Longhorn Network, which pays the school $15 million annually and contractually obliges the network to broadcast 200 Texas athletic events per academic year through 2031.

In 2019, the Big 12 and ESPN rearranged their broadcast deal — which ends in 2025 — to allow every affiliate school except Texas and Oklahoma to provide inventory to ESPN+. The agreement, as reported by the Sports Business Journal (through the Austin American-Statesman) pays the conference $22 million per year. Oklahoma sold its third-rate rights to Fox.

It’s possible ESPN could rework the Longhorn Network deal in the event that Texas and Oklahoma move to the SEC, but Fox probably wouldn’t be content to part with its two largest college football assets before the Big 12 contract expires in 2025. . In addition, the addition of two teams to the SEC would reduce the amount each affiliate would receive from ESPN’s new rights deal; it’s possible that ESPN would be forced to pay more on an annual basis in its deal with the conference.

ESPN could consider that move, as it could be offset by turning down a future TV rights deal with a significantly less attractive Big 12.

LAKE: How the Newly Proposed College Football Playoff with 12 Teams Would Work

If Texas and Oklahoma were to leave the Big 12 before the TV deals close, it would cost both schools a significant amount. For example, Nebraska and Colorado paid exit fees of $9.25 million and $6.86 million, respectively, to leave for their new conferences. Missouri and Texas A&M each paid $12.4 million to go to the SEC.

However, those fees were paid in 2010 and 2011 — before the Big 12 signed a $2.6 billion 13-year rights deal with Fox and ESPN. It’s unclear how much Texas and Oklahoma would have to pay in exit fees if they left for the SEC before 2025, but it would almost certainly be more than what Nebraska, Colorado, Missouri and Texas paid A&M to exit the Big 12.

The Longhorns and Sooners may be willing to take on that fine with the SEC’s promise of future earnings — but would the affiliates be willing to accept them?

It’s likely Texas A&M and Missouri would strongly consider barring Texas and Oklahoma from attending the conference, should the matter come to a vote of SEC presidents. It’s clear that both institutions — along with Colorado and Nebraska — left the Big 12 to escape the long shadow of Texas at the conference, in part because of the dedicated network and disproportionate power it wielded over its peers.

Bjork is already known as an opponent of every move from Texas to the SEC. The conference bylaws state that at least 11 of the 14 schools must vote yes to invite a potential new school.

While Michael Young, president of Bjork and A&M, might initially be tempted to oppose Texas, promises of higher revenues from within could pressure the conference to vote yes.

It is uncertain how the other SEC schools, except Missouri and Texas A&M, would vote on this issue. Adding the top two Big 12 programs to a conference that already includes Alabama, LSU, Georgia, Florida, Tennessee, and Auburn — not to mention Texas A&M and Missouri — would make it exceptionally harder for teams to claim the conference title. to win and earn a College Football Playoff berth.

There is also the issue of divisional reshuffling, which would likely make several teams unhappy. Texas and Oklahoma could move to the SEC west, forcing Alabama and Auburn east, much to the chagrin of Florida, Georgia and Tennessee. The teams that left in the west — Arkansas, LSU, Texas A&M, Ole Miss and Mississippi State — probably wouldn’t be happy with the additions, either.

BENDER: What Realigned SEC Would Look Like With Texas, Oklahoma

The SEC could also place the teams in different divisions, much like Texas A&M and Missouri in 2012, which on paper would create more balance between the divisions. Or the conference could be looking at a pod scheduling format, one that would likely sacrifice one of parity or traditional rivalry at the conference. In addition, it is unlikely that teams would react positively – at least behind closed doors – to additional competition.

Big 12 teams have also already released statements in response to the news, such as this one from the state of Oklahoma:

There are other sports that the SEC would consider besides football. Texas and Oklahoma would bring powerful programs in basketball, softball, baseball, gymnastics, men’s and women’s golf, and more. Those would add to the impressive inventory of content already available to ESPN, which could make a new rights deal more lucrative for the network, the SEC and its affiliates. Not to mention the academic merits of those universities.

But football is primarily in the SEC, and any additional roadblocks the conference may face regarding that sport — especially with the playoffs rescheduling looming — could be enough to block Texas and Oklahoma’s admission. to obstruct.

Max Scherzer is thankful he’s still alive, and so are we. The ace of the Nationals made the start in the 2021 All-Star Game, the fourth time he has done so in his career, but it was the first time he was nearly beheaded by an opposing batter. In the first inning, Vladimir Guerrero Jr….

Luke Prokop made history on Monday. The Predators defender signed an entry-level contract with Nashville in December, but perhaps the bigger event for him happened on July 19, when the 19-year-old came out as gay and became the first openly gay NHL player. Prokop posted a tweet announcing it: Prokop’s full statement: Hello everyone. While…

© Reuters. FILE PHOTO: Voting rights activists rally during a protest against Texas lawmakers enacting a slew of new voting restrictions in Austin, Texas, US, May 8, 2021. REUTERS/Mikala Compton/File Photo By Julia Harte (Reuters) – Dozens of Democratic lawmakers left Texas on Monday as part of an orchestrated move to derail efforts by their…

Royals play-by-play announcer Ryan Lefebvre learned the hard way Monday night that there is never a good time to praise someone on a live broadcast. He also learned that Reds third baseman Nick Castellanos has terrible timing when it comes to home runs. Lefebvre in the top of seventh took time to commemorate George A….

A year later than expected, but the fans are nevertheless ready: Olympic swimming is back. It was an exciting 2016 Rio Games, from Simone Manuel and Penny Oleksiak pairing the 100m freestyle and Katie Ledecky setting two new world records, to Ryan Murphy’s outstanding Olympic debut and the final Olympics for Michael Phelps. This year…

Maria Taylor may not last at ESPN until the end of the 2021 NBA Finals. The network host’s contract has been a subject of much debate, with the on-air favorite Stephen A. Smith reportedly asking for money — close to $8 million — to stay with ESPN. ESPN reportedly has a $3 million contract offer…